Skip to content
Home/Spa/Fat Thighs and Embracing Our Imperfections

Fat Thighs and Embracing Our Imperfections

Last night, I was invited as a guest speaker for I Am That Girl’s Boston Chapter. If you’re not familiar with I Am That Girl, it’s a “community that inspires girls to discover their innate worth and purpose.”Obviously, their mission is right up my alley so I quickly accepted the invite!

Each meeting, the girls pick a different topic to discuss and in honor of NEDAwareness Week (National Eating Disorder Awareness Week), the topic was disordered eating habits & ways we restrict ourselves as women. Since I have been there and now work with other women to overcome diet-obsessed living, they asked me to shine the light on disordered eating habits beyond Anorexia, Bulimia, and bingeing.

It’s important to know that even habits like counting calories (in an unhealthy way), gym addictions, obsessions with the scale, feeling of shame/guilt, and restricting yourself with extreme diets and “diet-food” can be extremely detrimental to your health and overall wellbeing. I also want women to know that while these issues often aren’t talked about, that doesn’t mean they don’t exist. Heck, in college I thought my highly restricted eating habits were normal, and my only option if I wanted to be skinny. I often think “if only I had someone to talk to about these things back then,” but instead I chose to stay mum. I think as scary as it may be, talking it out and being open about these issues is one of the most therapeutic things you can do. 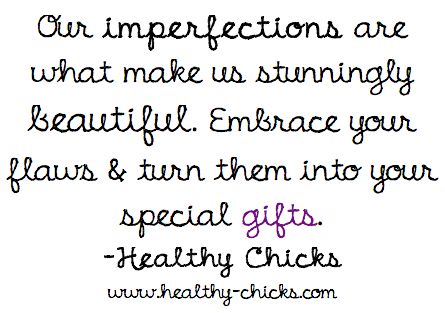 For the IATG meeting, I planned a discussion highlighting my personal story, and then shared 7 Tips to Happy, Healthy Diet-Free Living. Pointer #3 was “Focus on Your Strengths Rather Then Dwelling on Your Flaws,” which immediately brought me right back to a Flashback:

Growing up, I never worried about my weight, pant size, or the food I put into my mouth. I just was. On that note, I came from a very loving family who loved food (we still do!) but I didn’t stress about it. I just ate. And up until I was 17 years old, weight, diet, scales, and calories were foreign words to me. Rather, my thoughts consisted of boys, gossip, makeup and plans for the weekend.

This all changed my senior year of high school, during a cruise with some close family friends. I was lying on a lounge chair in my red-flowered bikini one afternoon, soaking up the sun, unfazed by the fact that half of my body was exposed to the other passengers, when one of our friends (probably no older than 9 at the time) shouted, “Holy crap, your thighs are HUGE Rach!” Shocked and embarrassed, I quickly covered them up with my oversized beach towel. My face blushed, turning a bright tomato red.

Shortly after the little episode, I put my shorts on over my bathing suit and we all went back to tanning and chatting as if nothing happened. But, while I may not have realized at the time, that day on the cruise ship was the start of my body image issues.

When I got home from the cruise, life continued where it left off. Nothing had really changed, other than that I was a bit more conscious of what my body looked like. Once I saw the pictures from the trip, I was shocked at how “big” I looked.  “How did I get here?” I asked myself.

So I decided to step on the big, bad scale that sat on my bathroom floor, something I had never done before.  The only time I ever got on a scale was when it was mandatory at a doctor’s appointment, and even then I didn’t care to know what the number actually was.

But, that day I decided to be a big girl and step on the old, rusted black and white scale. When the meter finally settled in at a number, I was shocked and appalled by what it said. Absolutely mortified. That was the day I began dieting and being obsessed with my image, but little did I know this viscous cycle would last for 5+ years.

The reason I’m bringing this up is because during these times I was extremely harsh on my body, particularly my “fat thighs.” I’d avoid wearing jeans because I thought they made me look ginormous, and I hid behind towels and shorts at the beach, mortified by my body. In fact, up until a realization I had during a trip to the beach a year and a half ago, I’d even leave my shorts on while tanning because I’d rather sacrifice awkward tan lines than exposing my “ugly” body.

Now, I’ve come to a place where I appreciate my body more than ever. I can look at my body in the mirror and be proud of what I see. I can walk around in a bathing suit and be OK about my not-so-thin Non Model legs, or even a little jiggle. I can smile and accept when my boyfriend tells me I look beautiful.

How? Here’s the thing: I’m always going to have “bigger thighs.” I’m a Pear Shape for crying out loud! However, that doesn’t mean I need to let my “big thighs” define who I am. In fact, sometimes your greatest flaws (like my “fat thighs”) can be turned into a gift in disguise. For instance, while I’m still aware that my thighs aren’t ever going to be teeny-tiny, I now look at them as strong, as a gift that carried me through multiple half marathons.

I encourage all of you to do the same. Rather than dwelling on your flaws, relish in your strengths. Or even better, take one of your biggest “flaws” and turn it into a hidden strength. Your strengths can be anything from gorgeous lips to killer abs, or maybe even that you’re an amazing dancer of have a special ability to make people laugh. Dig deep and I’m certain you’ll find something extra-special about you.